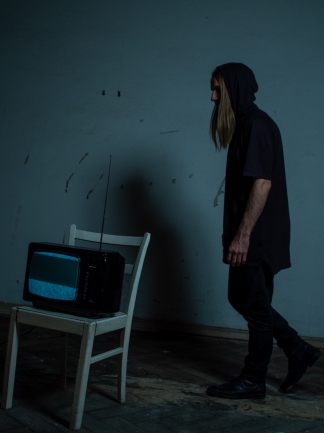 Gus Ring always felt like an outsider. Growing up playing trumpet in orchestras, he later ended up screaming in metal and hardcorebands. From this grew Gus unique style of fragile, dark, melancholic dreampop. His works has been compared by critics and fans to songwriters like Jeff Buckley and Damien Rice, and bands such as The Cure and Wovenhand.

While touring Europe consistently Gus has released the two full-length albums Boredomtapes (2015) and Hypnoseas (2017), creating a dreamlike space of music where he could just close his eyes and drift away. During live performances, the audience is invited to progressively go deeper and deeper within, finding their innermost sorrow and letting it go.

“Gus Ring has something else, something unique, and not even if you’d point a gun to my head would I be able to put my finger on what it is. It’s like a beautiful divine shimmer spreading across the room.”
Ricky Holmqvist, Drefvet.se

“It doesn’t become generic for a second, and it’s to say the least, very original.”
Simon Lundberg, Gaffa.se

“At a first listen it may sound like every other guitarballad, but inside Gus’s voice and melodies hides a darkness that slowly reveals itself and gives the music such a beautiful nerve.”
Andreas Homanen, Norrköpings Tidningar & Östgöta Correspondenten

“Gus Ring uses the attributes of the traditional singer-songwriter, but makes it sound like something else, something different.”
I’m Kingfisher

“Gus Ring is sharing cosmic wisdom, and listening to his music is like taking drugs – but without the drugs.”
Art Stalker, Berlin

“We’ve been watching singer-songwriters all day, and we’re bored with it. Then Gus showed up and did something different.”
Copenhagen Songwriter Festival